The CORE project originated as a traditional CDISC project with planning and volunteer/collaborator recruitment during spring & summer 2021 and formal kickoff in Sept 2021. During summer 2022, CDISC transitioned CORE development to an open-source framework. This page (tab) describes the project goals, objectives, and high-level roadmap; Please see the Program Governance page (tab) for description of the open-source governance framework. Please see the Planning & Status page (tab) for the latest CORE activity, which is now guided by the open-source CORE Roadmap Board.

CDISC Conformance Rules are an integral part of the Foundational Standards and serve as the specific guidance to Industry for the correct implementation of the Standards in clinical studies. An emerging Industry best practice is to use Conformance Rules on an ongoing basis, throughout the study, to keep the data as close to submission ready as possible and to ensure quality in all data exchange scenarios.

Current CDISC Conformance Rules need to be expressed in a common specification to be loaded to the CDISC Library. In addition, an executable component must be developed for every Conformance Rule.

The overall goal of the CORE Project is to deliver a governed set of unambiguous and executable Conformance Rules for each Foundational Standard, and to provide a Reference Implementation of an open-source execution engine for the executable Rules.

CDISC has collaborated with Microsoft and other organizations to develop the CDISC Open Rules Engine (CORE), open-source software, which will execute machine-readable CDISC Conformance Rules retrieved from the CDISC Library. The global clinical research community will be able to leverage the free and open CORE software to test study data for conformance to CDISC standards as well as to regulatory and sponsor-specific conformance rule sets.

The CORE Project objectives are to:

The following diagram illustrates the concept of the CORE project, including the Conformance Rules, the executable form of the Rules, and the Rules execution engine: 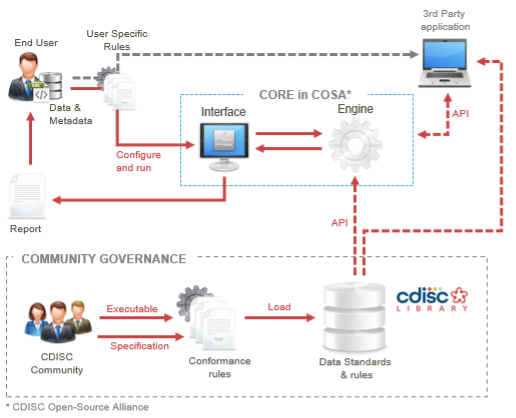 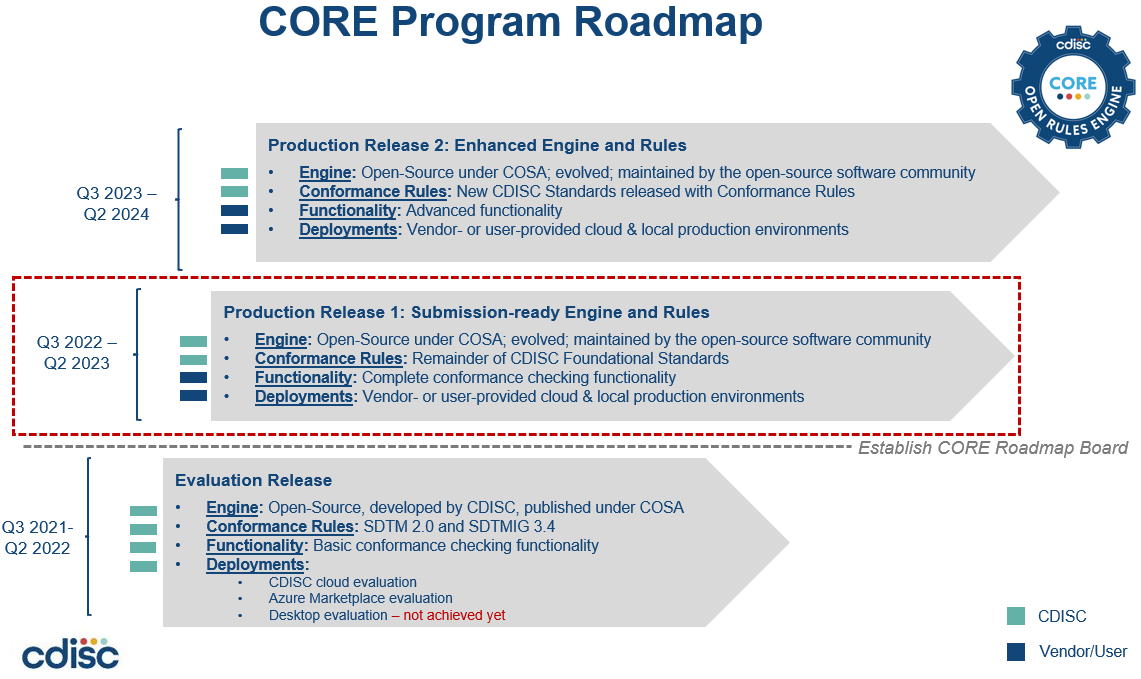 During the first phase (Evaluation Release 0):

The second phase of CORE (Production Release 1) has recently begun. In this phase:

We invite your organization to participate in this exciting new project.
Please visit the CORE Project Participate tab to learn more.

Transition of the CORE Engine Reference Implementation to the open-source environment was completed with provision of the Engine in GitHub. The Engine is: 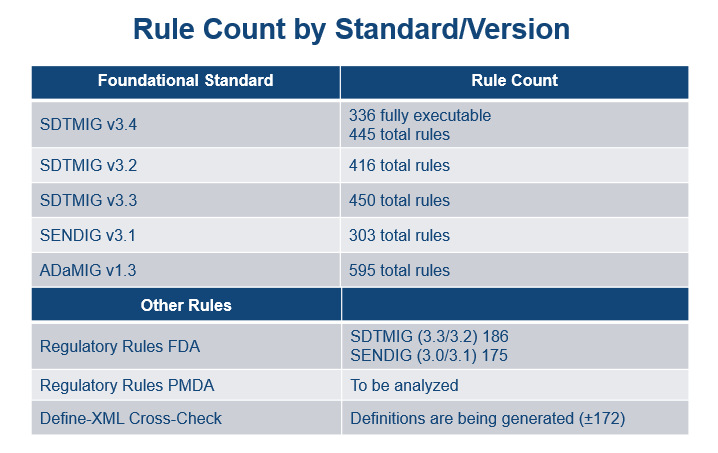 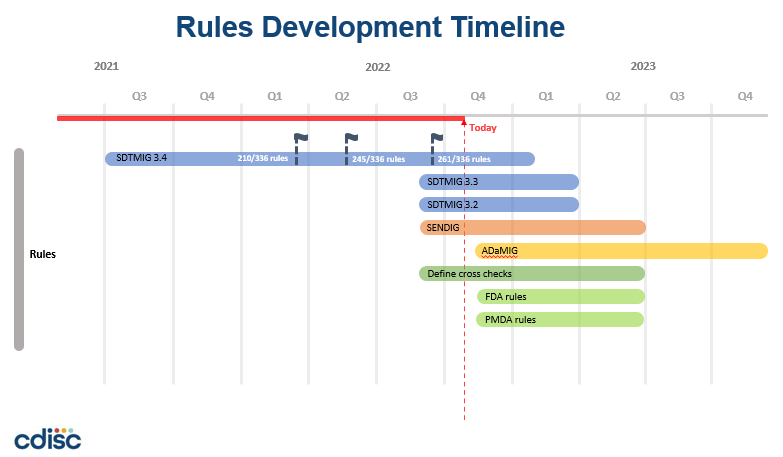 Engine and Deployments Planning and Status 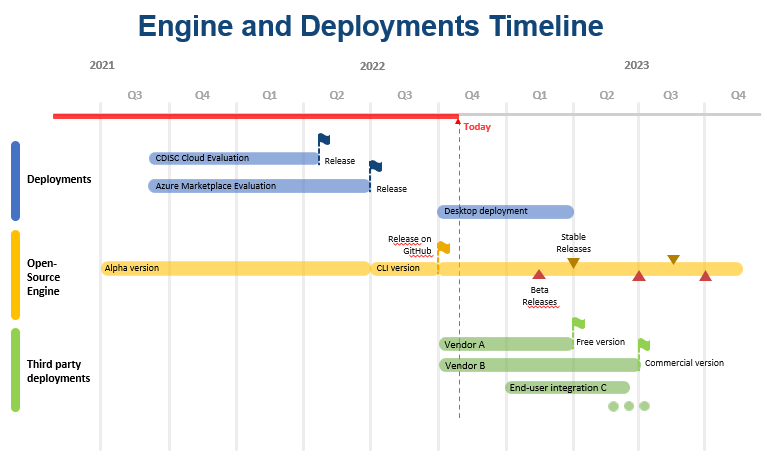 During the summer of 2022, after completion of the initial set of executable Conformance Rules (for SDTM 3.4) and release of the evaluation version of the CORE Engine Reference Implementation, CDISC transitioned the CORE project from a traditional CDISC-led project to an open-source framework. The transition focuses on: 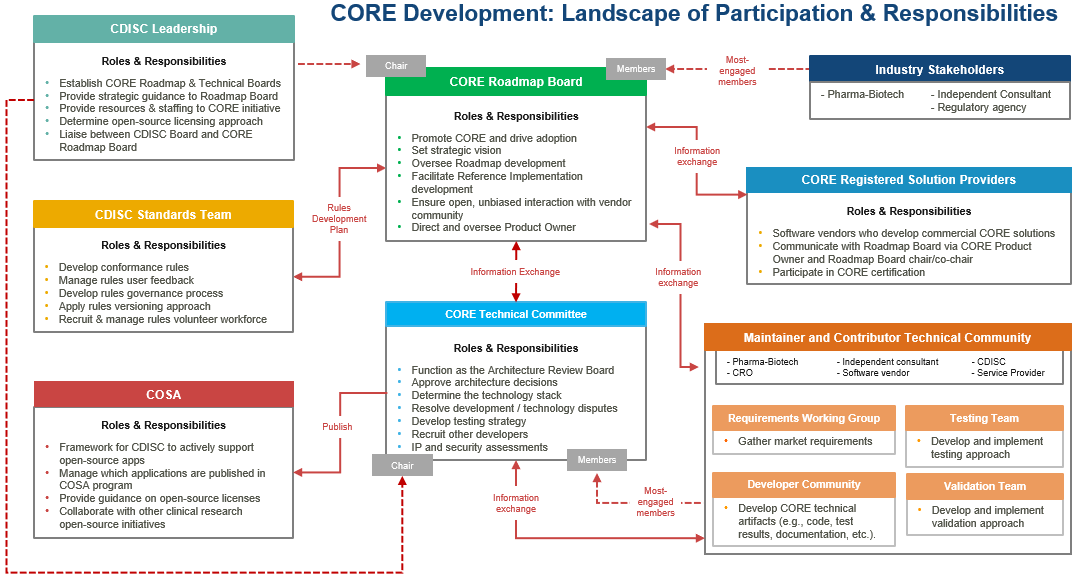 Following are high-level highlights of the CORE Roadmap Board’s responsibilities:

Following are the CORE Roadmap Board members:

The Technical Committee is comprised of the most-engaged CORE stakeholders from the CORE Maintainer and Contributor Technical Community. These are the volunteers who are currently most active in the technical side of development of the CORE Engine Reference Implementation.

Following are high-level highlights of the CORE Technical Committee’s responsibilities:

CDISC held a webinar 20 July 2021 to provide a deeper understanding of the CORE project, share the “ask” of participants and answer questions from attendees. We invite you to listen to the webinar recording to learn more.

Following is a link to the CORE presentation at the 2022 CDISC US Interchange:

How do I set up a CDISC Library Account?

Please visit the Try It Now tab to set up an account.

Will a subscription to the CDISC Library be required to develop/use CORE?

In what computer language will the CORE executable conformance rules be written? Will the executable rules be system agnostic?

All executable rules for CORE (“Rules”) are expressed in YAML. YAML is a non-proprietary data interchange language. Rules are authored in the Rule Editor, which is an on-line web application. Prior knowledge of any programming languages is not required to author Rules in the Rule Editor. All Rules are based on one data model, from which we deduce a schema. This schema is the backbone of the Rule Editor, providing syntax hints and validations.

CDISC maintains rule sets along with publication of foundational standards. Many conformance rules in these rule sets can easily be transcribed into metadata and rule logic, whose structure is bound to the schema. Schema validated Rules are sent to the CORE Rule Engine (“Engine”) for execution.

The Engine provides a framework to plug-in new rule types developed by the CORE team or by other implementers that have the need for additional types of rules.

CDISC plans to only test and validate the Rules with the Engine; however, vendors and sponsors will have the option to develop their own applications to work with the Rules, under an open-source arrangement.

In what output formats will the CORE reports be available?

How can these rules and open-source technology be integrated with current operational clinical data systems?

How does CORE relate to open-source and commercial systems available today?

At the time this response is being written (July 2021), the CORE project is just launching and the Regulatory Agencies have not yet determined their participation in the project or their future use of CORE vis-à-vis their use of any other Conformance Rules systems.

Yes, CDISC would ensure appropriate technical support is provided for future use of CORE by the Regulatory Agencies.

How can I access the CORE source code to implement my own conformance checking tool?

CDISC will provide details when the CORE source code is released as open-source on GitHub.

Will CDISC provide GitHub training when CORE is released as open-source as GitHub?

Yes, CDISC will provide GitHub training when CORE is released as open-source on GitHub.

Is the CORE API based upon the REST standard?

Yes, CORE has a REST API.

Validation of a CORE Implementation

How can I confirm that my implementation of the CORE engines works correctly?

CORE will include a suite of automated tests that can be used to help confirm that a CORE implementation is functioning correctly. CDISC also plans to implement a certification program to verify that software that executes the Conformance Rules functions correctly and consistent with the CORE Reference Implementation.

If companies/organizations develop their own engine, how is it guaranteed that this implementation obeys (i.e. gives the same results) as the reference implementation?

CDISC plans to implement a certification program to verify that any software that executes the Conformance Rules functions correctly and consistent with the CORE Reference Implementation. All CORE Certified software engines will demonstrate that they yield the same results given the same set of rules and CDISC datasets.

How does CORE handle data security?

CORE has undergone a security review and comprehensive threat assessment to identify and address vulnerabilities. The CORE architecture addresses stringent data and application security requirements to ensure that CORE can be deployed in a highly-secured and validated environment. Since CDISC will not provide a production deployment of CORE, each implementation should be evaluated to ensure the environment meets all identified security requirements. Given the detailed nature of software and data security, CDISC plans to publish a white paper to provide a comprehensive response to address CORE security questions.

I would expect that the implementation of the rules will identify gaps/errata in the SDTMIG 3.4. Is there a planned feedback and development cycle for the ruleset to progress hand-in-hand with the CORE initiative?

Going forward, the development cycle for the Conformance Rules will become a normal part of the standards development.

Can the tool be available as desktop tool also?
The CDISC Conformance Rules will be metadata that resides in the CDISC Library. Will the sponsor-specific rules also reside in the CDISC Library?
How to build the sustainability of this open-source project?

CORE will be released as an open-source project under the MIT license, and we will continue to grow the community of volunteer developers, rule authors, and testers that have contributed to CORE's development thus far. As we transition to open-source development and governance models, additional roles and opportunities will emerge for CORE contributors. Over 80 volunteers from over 50 companies have contributed to CORE development to date. If you're interested in joining us, please check out the CORE page.

CDISC has initiated the CDISC Open Source Alliance (COSA) to support and promote open-source software developed for the CDISC standards, including the CORE project. COSA will plan community building activities such as hackathons, workshops, conference sessions, and webinars to help build the CORE open-source community.

Run conformance checks on sample CDISC datasets to explore the CORE MVP's features and functionality. A basic Graphic User Interface is provided to operate the Engine. CORE MVP is freely available to employees of CDISC members and non-members.

Access: You will need to create a cdiscID, which allows Single Sign-On to CORE, the CDISC website, CDISC Library, and the CDISC Learning System.