The Magic that Happens between CDASH and SDTM

On occasion the mapping from CDASH to SDTM is complex. This article provides a step-by-step explanation to help follow the iteration from the CDASH example to the SDTM example.
The Clinical Data Acquisition Standards Harmonization Implementation Guide (CDASHIG) provides examples of how to collect clinical trial data and how to implement the CDASH standard for case report forms. The purpose of CDASH model is to provide a standard way to collect data across studies and sponsors. CDASH’s format and structure provide clear traceability from data collection to submission in the Study Data Tabulation Model (SDTM).

In most cases, viewing the annotated Case Report Form (aCRF) example with metadata is straightforward when looking at the same data transformed into SDTM. In some instances, however, it is not. In these cases, "magic" happens from data collection in the CDASH example to the data tabulation in the SDTM example. There are assumptions made regarding the collected data and metadata that are then transformed to the submission data tables. It is not necessarily clear how one went from point A to point C. This article provides a look behind the curtain at the magic that sometimes occurs between the CDASH and SDTM examples.
There are a number of ways this transformation can be achieved operationally. This example shows some of the potential steps that may occur behind the scenes in an electronic data capture (EDC) system to help a data manager, CRF designer (or other curious observers) understand what happened and how it occurred step by step.
In Example 1, which is derived in most part from the Crohn's Disease Therapeutic Area User Guide, the nested example CRFs have colors and each color means something different. The yellow CRF section is nested within the green CRF section which, in turn, is nested within the white CRF section. Information in the white CRF section is collected only once, but the green section is completed once for each surgery and the yellow section is completed once for each GI segment impacted by each surgery.

In this example study, the sponsor was interested in collecting information on any Crohn's disease-related surgeries.

The drop-down list is not visible in the screenshot below but can be seen in the CRF metadata table included in the Crohn’s Therapeutic Area User Guide. Note: the drop-down list is not exhaustive, but rather details the more common procedures associated with Crohn's disease. Depending on the type of procedure, the remaining questions are displayed when applicable. 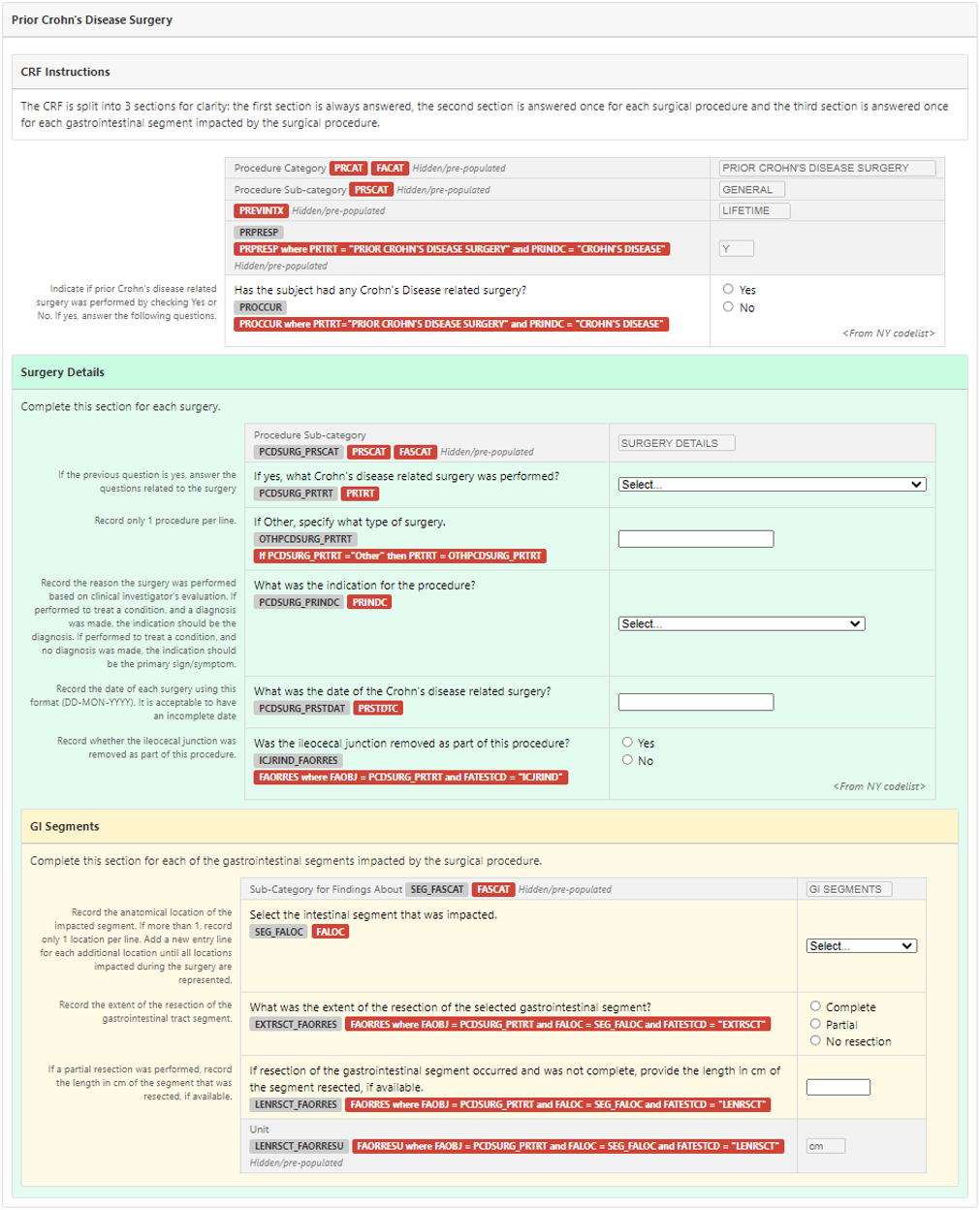 Data from each section of the CDASH CRF might be recorded in a separate database table.

Row 1: Shows the collected details of the first surgery recorded for subject CR002-001.

Row 2: Shows the collected details of the first surgery recorded for subject CR002-002.

Row 3: Shows the collected details of the second surgery recorded for subject CR002-002.

Row 4: Was created automatically by the EDC system. All enterable variables (PCDSURG_PRTRT, OTHPCDSURG_PRTRT, PCDSURG_PRINDC, PCDSURG_PRSTDAT and ICJRIND_FAORRES) are blank because the subject CR002-003 did not have any prior surgery for Crohn's disease.

Rows 3-8: Show the collected details of the six gastrointestinal segments that were impacted by the second surgery recorded for subject CR002-002.

Alternatively, data collected in all three sections of the CRF might be stored in a single database table, with higher-level information repeated on each of the rows containing information from a lower level. The following table contains the same example data that is represented in the separate tables above.

Rows 3-8: Show the collected details of the six gastrointestinal segments that were impacted by the second surgery recorded for subject CR002-002. The information entered on the non-repeating CRF section and the details of the "Ileectomy with colectomy" parent procedure (which were entered on the second repeat of the repeating "Surgery Details" CRF section) are repeated on the records for all gastrointestinal segments impacted by the "Ileectomy with colectomy" procedure.

Row 9: Shows the information collected in the non-repeating "Prior Crohn's Disease Surgery" CRF section. As there was no prior surgery for Crohn's disease for this subject, no further information was collected on the repeating CRF sections. For these sections, the enterable variables (PCDSURG_PRTRT, OTHPCDSURG_PRTRT, PCDSURG_PRINDC, PCDSURG_PRSTDAT, SEG_FALOC, EXTRSCT_FAORRES, LENRSCT_FAORRES and ICJRIND_FAORRES) are blank, but values are present for the variables that were pre-populated on the CRF (PCDSURG_PRSCAT, SEG_FASCAT and LENRSCT_FAORRESU).

In some EDC systems, collected data might be stored in a horizontal structure, with all data collected on the CRF for single subject being represented on a single record. In such a structure, the set of values collected for each completion of the repeating CRF sections would be represented in a separate set of variables (e.g., PCDSURG1_PRTRT, PCDSURG1_PRSTDAT for details of the first surgery and PCDSURG2_SEG_FALOC3, PCDSURG2_LENRSCT_FAORRES3, etc. for details of the third GI segment impacted by the second surgery). A representation of this data structure is not included here because the variable names would not align with the CDASH variable names defined in the example CRF metadata above.

When data from the CDASH data structures represented above are mapped into SDTM datasets, some restrictions and conversions would need to be applied to create SDTM conformant data, including:

In this example, the sponsor was interested in prior surgery related to Crohn's disease. The sponsor elected to include in the PR domain a record indicating whether or not each subject had had any prior surgery related to Crohn's disease. On these records, PRPRESP is "Y" to indicate that the type of surgery ("prior Crohn's disease surgery") was pre-specified on the CRF and PROCCUR indicates whether or not the type of surgery had occurred for the subject. Other sponsors may elect not to include such a record and instead use the PRYN CDASH variable for data cleaning without submitting the response in the SDTM dataset.

When prior Crohn's disease surgery had occurred, the sponsor also collected details of each surgery that was performed. For most surgeries, the name of the surgery was selected from a pre-specified list on the CRF to ensure the same terminology was used and to avoid data entry errors. When the required surgery name was not present in the drop-down list, "Other" was chosen from the list and the name of the surgery was entered as free text. Although the terms in the drop-down list are well-defined, the investigator was still asked to provide details of any resection for each GI segment impacted by the surgery to verify the presence or absence of each segment. These details were recorded in the FAPR dataset where the FATESTCD and FATEST variables indicate the information collected and the FALOC variable indicates the GI segment.

In the dataset below, certain Expected variables have been omitted in consideration of space and clarity.

The SDTM data representations have been color coded to help visualize data collected using the example CRF shown in the CDASH example and how it would flow into the SDTM dataset.

Rows 1, 3: Show the subject had prior Crohn's disease surgery.

Row 2: Shows that subject CR002-001 had an ileectomy. The procedure was due to a perforation.

Row 4: Shows that subject CR002-002 had esophageal repair due to perforation.

Row 5: Shows that subject CR002-002 had ileectomy with colectomy due to abscess.

Row 6: Shows that subject CR002-003 had not had any Crohn's disease surgeries in their lifetime.

The FA dataset represents details of each of the surgeries that were performed, including the extent of resection of each gastrointestinal segment impacted by the surgery and whether the ileocecal junction was removed during the surgery.

Rows 1-3: Show that the ileocecal junction was not removed during the ileectomy procedure, the subject had a partial resection of the ileum, and the length of the segment resected was 60 cm.

Rows 4-5: Show that the ileocecal junction was not removed during the esophageal repair procedure and there was no resection of the esophagus.

Row 6: Shows the ileocecal junction was removed as part of the ileectomy with colectomy procedure.

Rows 7-13: Show the extent of resection of each segment impacted by the ileectomy with colectomy procedure. Only part of the ileum (50 cm) was removed during this surgical procedure, but the cecum and all parts of the colon were completely removed. 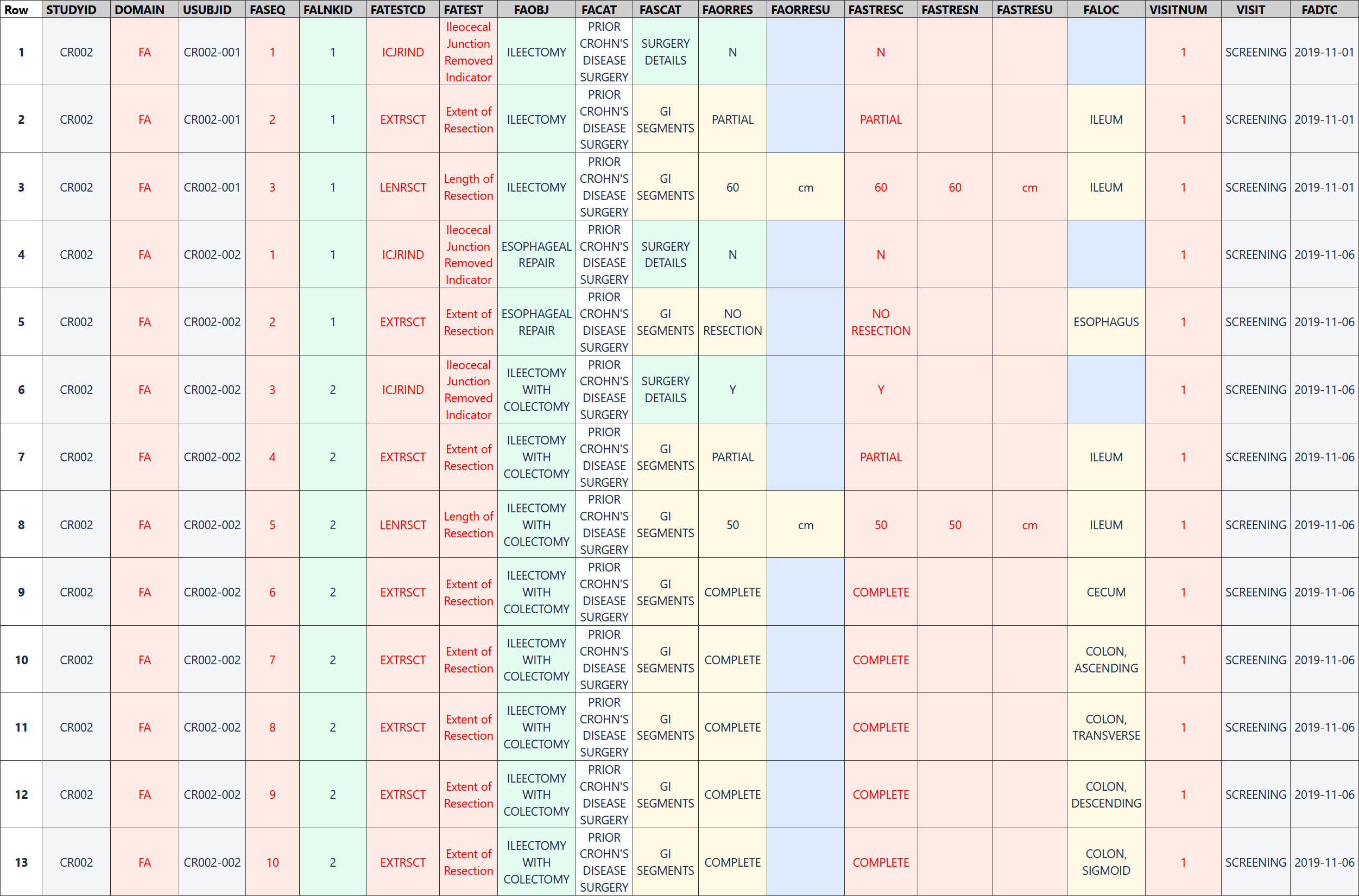 The RELREC dataset shows the relationship between the PR and FAPR datasets. The --LNKID variables were used to relate the records in PR and FAPR.

Depending on how the system is set up and what tool is being used, this may look different. There are several possible ways in which the "magic" could be implemented and, if the transformations are implemented within the system, collected data may never actually be present in separate datasets such as the CDASH data representation tables shown above.

The intention of this article has been to explain how the CDASH variable annotations included in the example CRF align with the potential structure of the collected data, while the SDTM mapping annotations help to indicate how the data gets transformed.

This article aims to help the user understand the transformation of a complex EDC extract. There are variations in the way in which any given EDC system might handle repeating fields or CRF sections. There is also variability among EDC tools; therefore, it is not possible to include all the different representations.

For an overview of the intricacies of the magic that happened between CDASH and SDTM, we invite you to watch our Public Review webinar for Work Package 1 of the Crohn’s Disease Therapeutic Area User Guide, which addresses Additional CDASH to SDTM Data Representation..