CDISC Conformance Rules are an integral part of the Foundational Standards and serve as the specific guidance to Industry for the correct implementation of the Standards in clinical studies.  An emerging Industry best practice is to use Conformance Rules on an ongoing basis, throughout the study, to keep the data as close to submission ready as possible and to ensure quality in all data exchange scenarios.

Current CDISC Conformance Rules need to be expressed in a common specification to be loaded to the CDISC Library. In addition, an executable component must be developed for every Conformance Rule.

The overall goal of the CORE Project is to deliver a governed set of unambiguous and executable Conformance Rules for each Foundational Standard, and to provide a minimum viable product of an open-source execution engine for the executable Rules.

CDISC is partnering with Microsoft to develop the CDISC Open Rules Engine (CORE), open-source software, which will execute machine-readable CDISC Conformance Rules retrieved from the CDISC Library. The global clinical research community will be able to leverage the free and open, Microsoft Azure-based CORE software to test study data for conformance to CDISC standards as well as to regulatory and sponsor-specific conformance rule sets.

The CORE Project objectives are to:

The following diagram illustrates the concept of the CORE project, including the Conformance Rules, the executable form of the Rules, and the Rules’ execution engine: 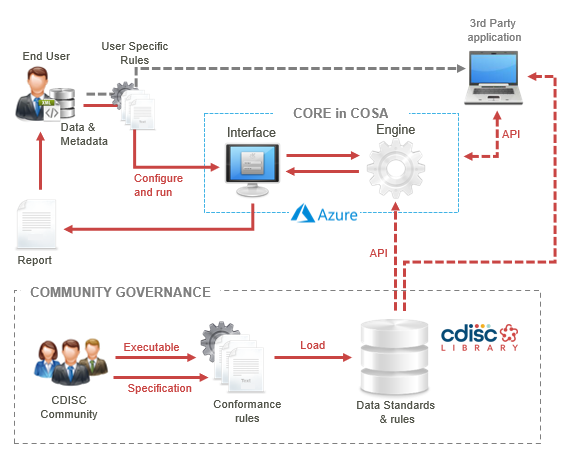 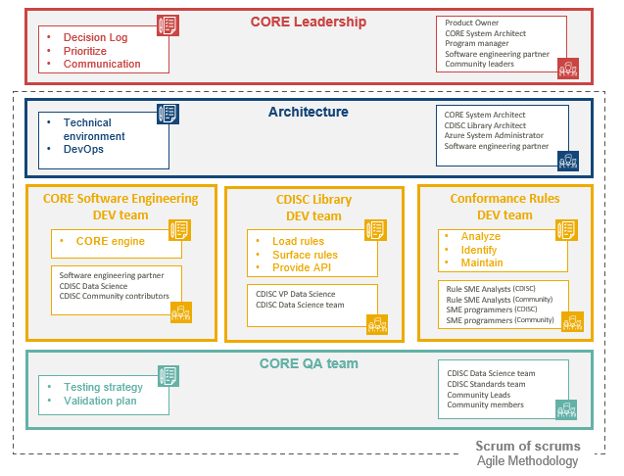 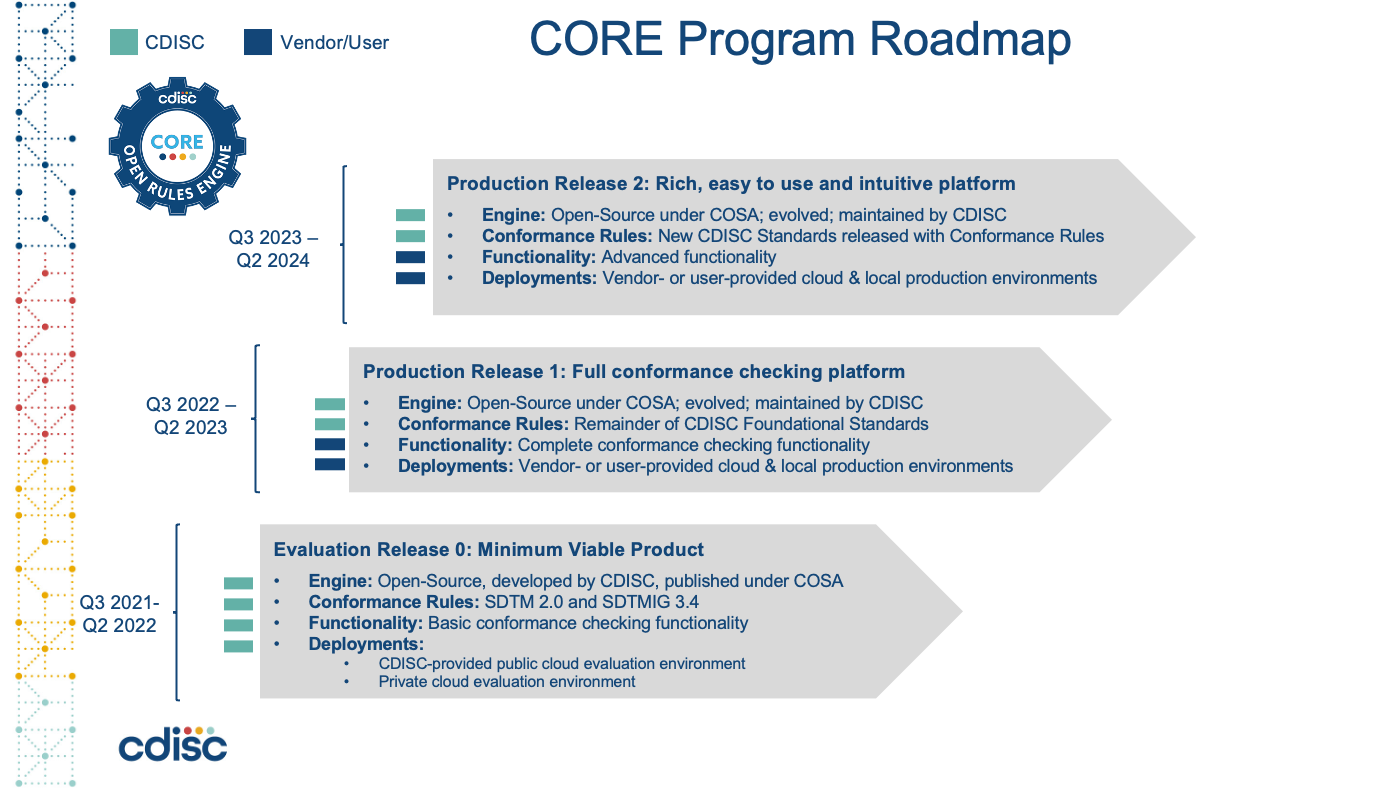 We invite your organization to participate in this exciting new project.
Please visit the CORE Project Participate tab to learn more.

CDISC CORE Presentation at 2021 US Interchange

Join us 7 June 2022 for an Onboarding Webinar where we will explain tools and processes that will prepare you serve with our very active, global team. The webinar will be followed by a Q&A session; you can submit questions for the Q&A session in advance of the webinar when you register.

CDISC held a webinar 20 July 2021 to provide a deeper understanding of the CORE project, share the “ask” of participants and answer questions from attendees. We invite you to listen to the webinar recording to learn more.

Will a subscription to the CDISC Library be required to develop/use CORE?

In what computer language will the CORE executable conformance rules be written? Will the executable rules be system agnostic?

In what output formats will the CORE reports be available?

How can these rules and open-source technology be integrated with current operational clinical data systems?

How does CORE relate to open-source and commercial systems available today?

At the time this response is being written (July 2021), the CORE project is just launching and the Regulatory Agencies have not yet determined their participation in the project or their future use of CORE vis-à-vis their use of any other Conformance Rules systems.

Yes, CDISC would ensure appropriate technical support is provided for future use of CORE by the Regulatory Agencies.

What is the planned timeline of the CORE project?

What will the 20% FTE effort look like and for how long is it needed?
What technical skills are needed to participate?
How can we volunteer?

Those interested in participating in the CORE project can express their interest by visiting the Participation tab and following the instructions.

Is a recording of the CORE webinar available?

Yes, the webinar was recorded, and is accessible on the Webinar tab.

I would expect that the implementation of the rules will identify gaps/errata in the SDTMIG 3.4. Is there a planned feedback and development cycle for the ruleset to progress hand-in-hand with the CORE initiative?

Going forward, the development cycle for the Conformance Rules will become a normal part of the standards development.

Good to see Evaluation Release 0 (Q3 2021 - Q2 2022) aims to implement conformance rules for SDTM v2.0 and SDTMIG v3.4. What is the timeline for users be able to configure customized rules?
Can the tool be available as desktop tool also?
The CDISC Conformance Rules will be metadata that resides in the CDISC Library. Will the sponsor-specific rules also reside in the CDISC Library?
How to build the sustainability of this open-source project?